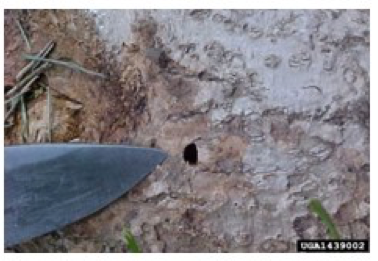 Since its discovery in Michigan in 2002, the Emerald Ash Borer (Agrilus planipennis or EAB) has destroyed hundreds of millions of ash trees throughout the United States. This invasive insect is native to Asia and attacks all species of ash (Fraxinus) as well as other members of the olive (Oleaceae) plant family including the native White Fringetree (Chionanthus virginicus). Since its first detection, EAB has spread to over 30 US states and 2 Canadian provinces. In New Jersey, EAB has been detected in 14 of the state’s 21 counties, including detections in Morris County, which has the densest populations of ash trees in the state. With a predicted 99% mortality rate for all ash trees in New Jersey, the number of ash trees lost due to EAB in the state could easily reach over 24 million. 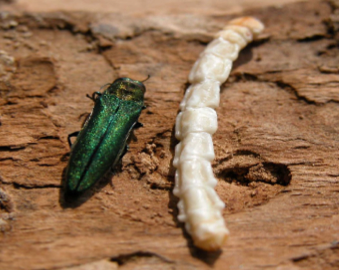 The Emerald Ash Borer is a beetle belonging to the Buprestidae family, commonly known as Jewel Beetles. An adult EAB is about 1/2” long and has a dark metallic green coloring. The adult beetles emerge from the trunks of trees in the late spring, leaving behind a distinctive D-shaped exit holes that are about 4mm in size. Adult EABs then feed off of the tree’s foliage for the next few weeks before mating. Although adult EABs do cause some damage to the tree’s canopy, it is the young larval stages of the insect that cause the most damage. Female EABs can lay up to 100 eggs on the trunk of a tree. Once hatched, the EAB larvae begin to chew through the tree’s bark until they reach its nutrient and water conducting tissues. The larvae then feed through the summer and fall seasons, creating serpentine feeding galleries throughout the tree’s vascular cambium. This feeding not only depletes the tree of essential nutrients, but also blocks its ability to transport water, eventually killing the tree within one to three years. 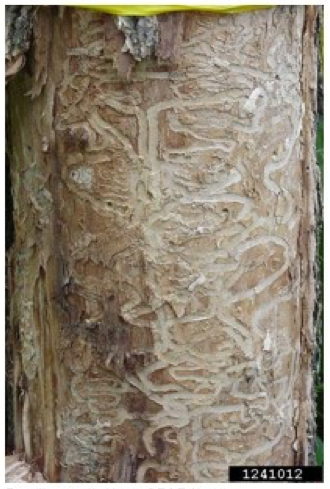 Control of EAB is difficult as most of the natural predators that keep their numbers in-check in Asia, do not exist in the United States. There are systemic chemical treatments that have shown to offer some protection, but these applications are very costly and must be made every two years. The USDA has also approved the release of some parasitoid species as a means of biocontrol, but the data on how effective these treatments are will take years to develop.

There are currently about a dozen ash trees considered to be part of the collection at Willowwood, with the majority of them being White Ash (Fraxiuns americana). Additionally, the Willowwood collection includes seven White Fringetrees. The health of the ash and fringetrees in the collection varies, with some being in good condition and others failing due to reasons other than EAB such as old age. After assessing the overall health of the ash and fringetree collection, it has been determined that 11 of the trees will be treated systemically to prevent EAB. However, this does not take into account the many ash trees that comprise the wood lines and forested areas at Willowwood.

Over the past two years the Natural Resources Department of the Morris County Park Commission has inventoried and mapped over 12,000 ash trees throughout 34 park facilities as part of their EAB Response Plan. All of the trees inventoried are considered to be in high-use areas and pose a potential risk to buildings, people, roadways and trails. The goal of this plan is to remove all of the inventoried ash trees before they begin to show signs of decline. At Willowwood, there are currently 57 ash trees that fall into this category.

The MCPC has been working with the New Jersey Department of Agriculture to release parasitoid wasps through the EAB Biocontrol Program. The park commission has also selected other trees, beyond those in the Willowwood collection, of historic and/or aesthetic value at other horticultural and historic sites to be treated for EAB. Arborjet, a leading manufacturer of trunk injection equipment and chemicals, has also shown interest in partnering with the MCPC to provide equipment and treatment for ash trees as well as other trees of significance as part of their Saving America’s Iconic Trees program. Replacement plantings of native trees are also planned for some of the areas that will be most impacted by ash tree removal. For more information on EAB and the complete MCPC EAB Response Plan, please visit MCPC website at morrisparks.net. There you will find a dedicated EAB page with answers to many frequently asked questions as well as links to additional EAB resources.